What is a Merle French Bulldog?

Learn about the Merle French Bulldog and How expensive they are. 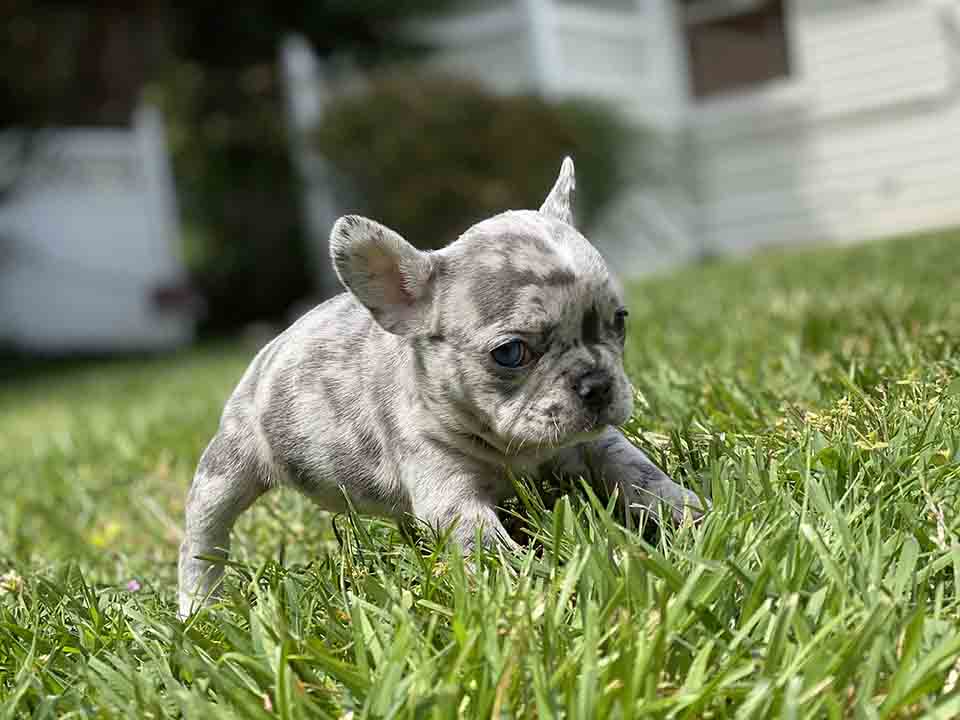 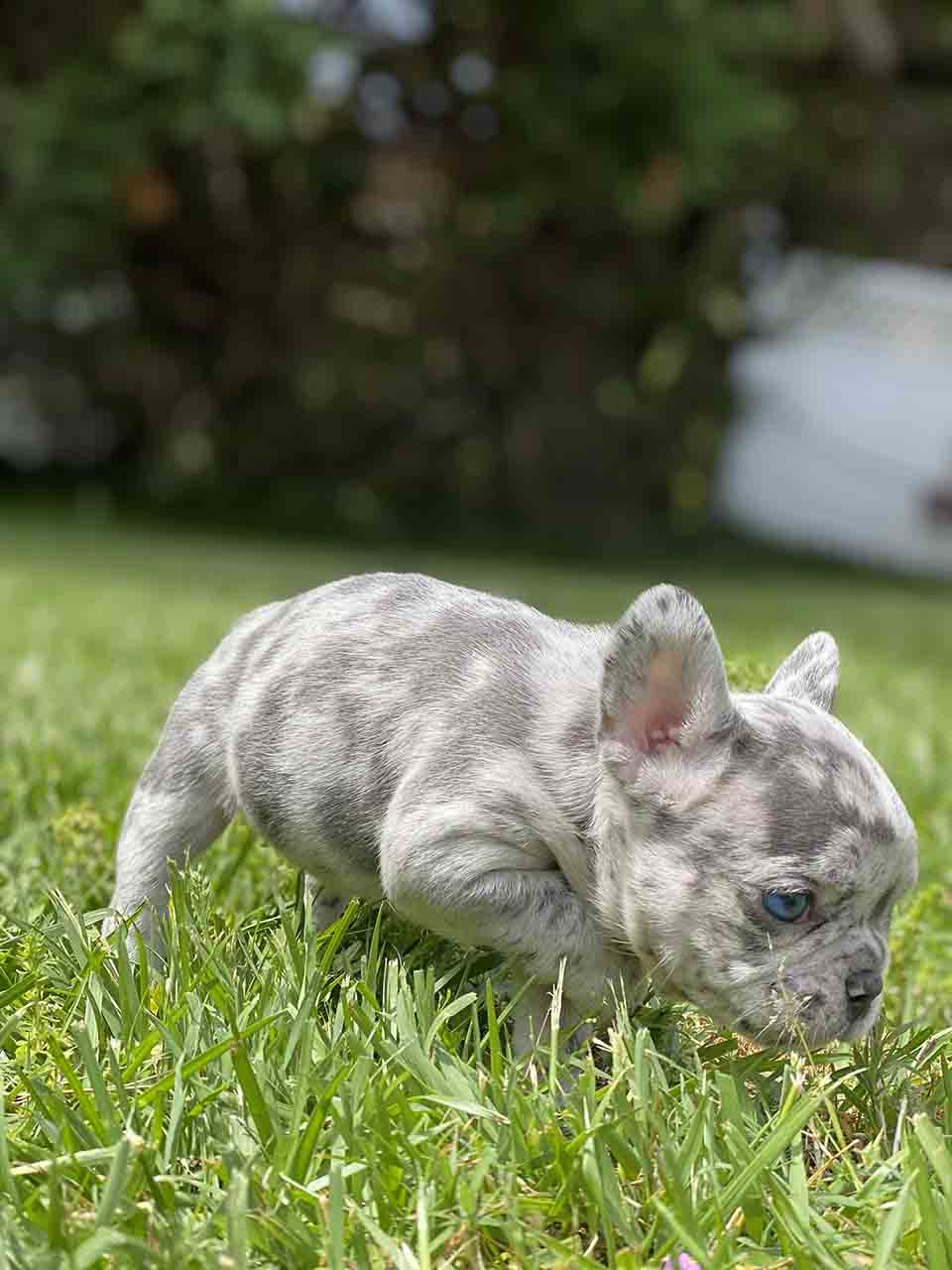 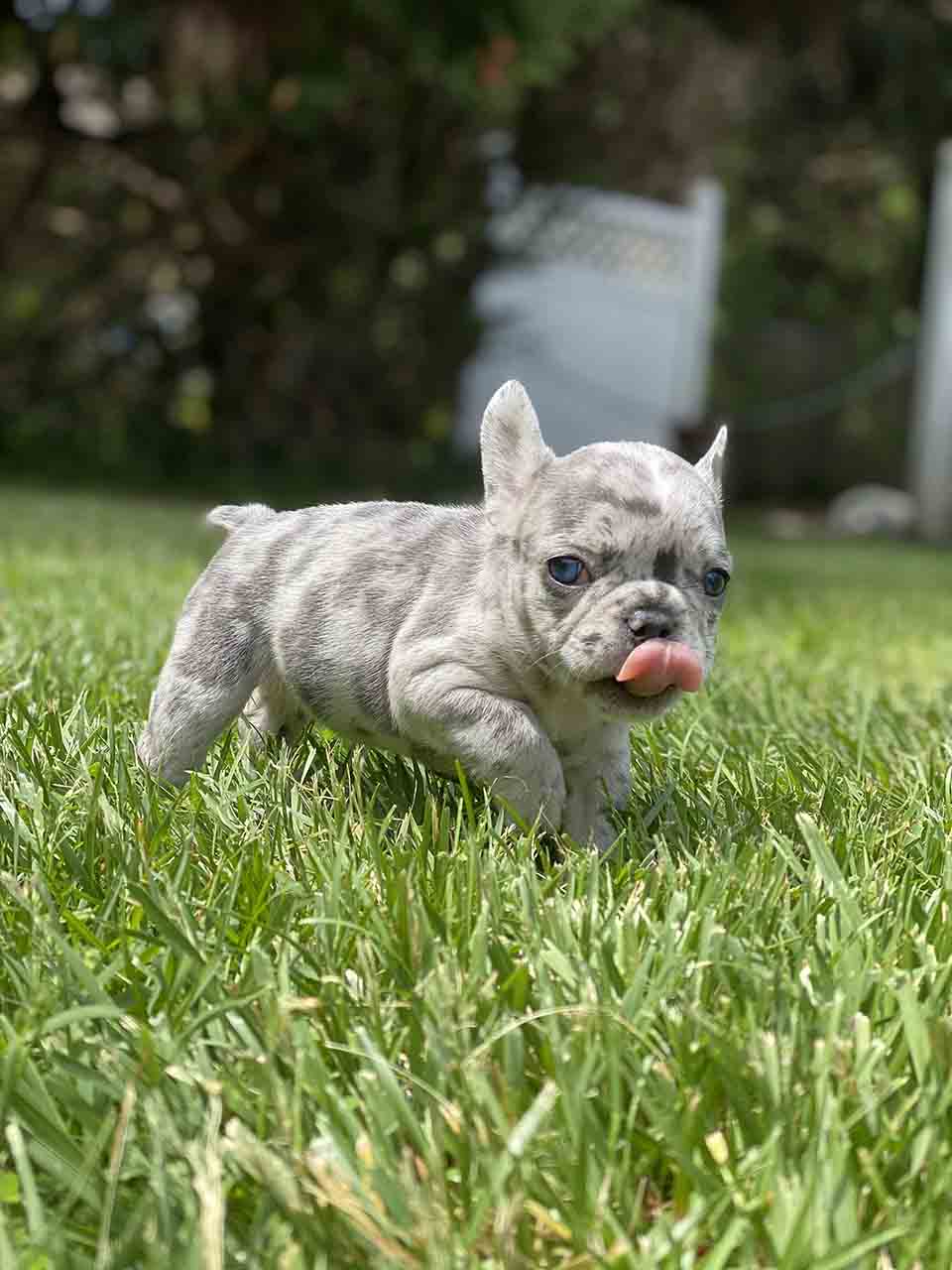 The signature of a Merle French Bulldog is a peppering of different colors on their coat.

These little dogs look like they’ve been splatter painted with patches or spots of red, gray and sometimes black. They’re a rare type of Frenchie that are popular because of their unique coloring. Because the Merle coloring is rarer than other types of Frenchies, the price tag for Merle French Bulldogs can range from $6,000 to $8,000. Compare that to a standard French Bulldog price of between $1,500 and $3,000.

While the Merle French Bulldog is recognized by the American Kennel Club, they’re aren’t recognized as a breed standard because their rare coloring is the result of a genetic defect.

You’ll have to take your Merle Frenchie to regular vet appointments and be mindful that these kinds of French Bulldogs can have a few more health issues than other Frenchies. Aside from that, Merles are just like any other French Bulldog. They snore, snort and grunt their way through life and are lovable, muscle-bound companion dogs that are great as family pets.

To get the speckled pattern on the coat, a French Bulldog must carry the Merle gene – and it’s a dominant gene. Consider the way traits are expressed in DNA – each trait is represented by a gene and the way those traits are expressed is dictated by gene combinations. Merles have the M-locus gene. This gene can also cause your Frenchie to have blue eyes because of random pigment dilution.

While the Merles that carry one dominant M-locus gene seem to be in the same health as most other Frenchies, those that carry two of the M-locus dominant genes tend to have problems. This happens when breeders combine the genes of two Merle parents. The puppies can be born deaf and have other problems due to their genes.

American breeders created Merle Frenchies. As the story goes, Merles were created because French Bulldog enthusiasts were looking for a new variation on the standard colors. Breeders combined French Bulldogs with Merle Chihuahuas to get a new type of Frenchie – and the Merle coloring can come in so many varieties that popularity spread quickly.

Now there are Blue Merles, Lilac Merles, Fawn Merles and a few other variations that create a unique dog. Because the Merle coloring was initially achieved by blending French Bulldogs with another type of dog, AKC only considers Merle French Bulldogs to be purebred Frenchies after the sixth generation Merle.

There is also a considerable amount of push-back to breeding Merle French Bulldogs because of the potential health conditions that can result. Problems like deafness, blindness, and intense skin conditions can result from breeding two Merle parents, creating a double-Merle puppy.

Merle Frenchies are popular because of their mottled coats. The coloring of these dogs starts with a base color that can be fawn, black, lilac, and any of the other Frenchie colors. Additionally, the dog is spotted with other colors, creating a splatter-paint look. It’s this Merle coloring that makes these dogs popular and expensive! These dogs are also expensive because of the concern surrounding breeding. Those in search of a Merle French Bulldog have to use only the best breeders who can guarantee they’re not over-breeding or being irresponsible in their breeding practices. Finding the best breeder usually means higher prices. It also means that you’ll most likely end up with a Merle-dominant gene puppy that is healthy and adorable.

Like all French Bulldogs, Merles grow to be about 25-28 pounds and are easy-going, affectionate and lovable dogs. They’re muscle-bound and tiny, making them more sturdy than other small dogs. They also fit in carry-on luggage, are great companions for errands and are excellent dogs for studio or apartment living.

They do snore, snort and make lots of noises because they are brachycephalic, which is a term that refers to the flat-faced features common to the breed. Their flat faces make it difficult to breathe and for them to cool off. They’re also prone to overheating, overexertion and asthma because of the shape of their heads.

Like the rest of the French Bulldog crew, they are a dog with a giant personality in a small package and they love nap time as much as they love play time. And they’ll be making noise while they’re doing both.

Frenchie as a Status Symbol

The list of celebrities that own French Bulldogs is endless, but it’s difficult to find a Merle Frenchie in the mix. Some of the Fawn Frenchies on the list include TV star Dieter Schmitz’s Frenchie named Wellington; Trapper the Frenchie, belonging to the rapper Chainz, and Jack Osborne’s Frenchie named Bruce. Other Famous Frenchies include Ashley Simpson’s white Frenchie named Alabama and Snoop Dog’s dog, Juelz.