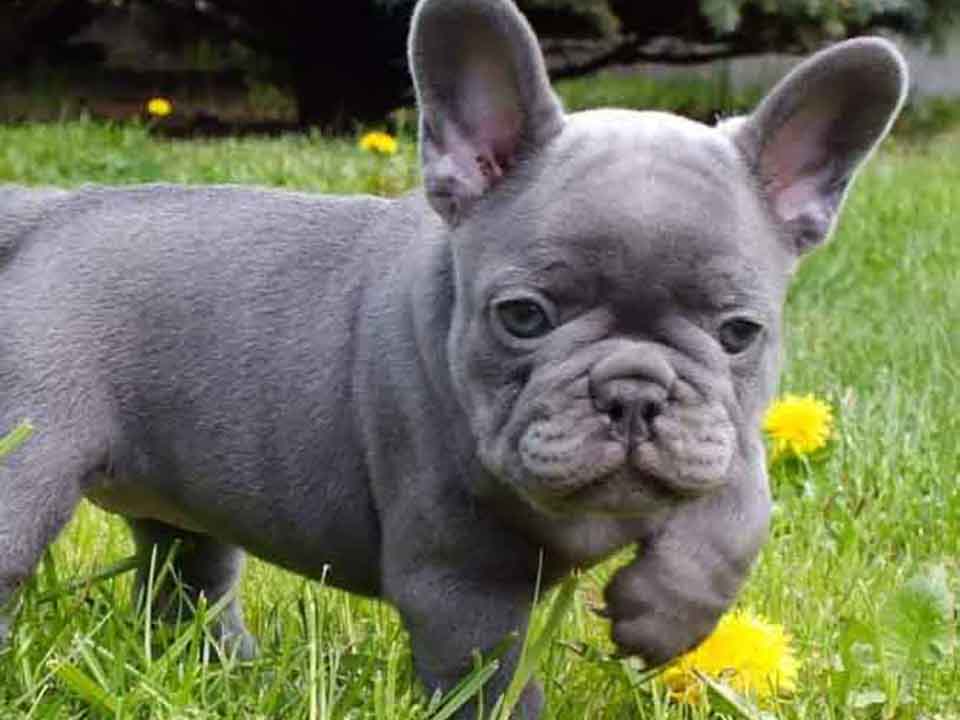 These uniquely colored Frenchies have a gray coat with a soft silver-purple hue that makes them look like they came from a fairy tale.

Some of them even have a light periwinkle blue cast to their short, gray coat, which is single-layered, like most other French Bulldogs. Their coloring is what makes Lilac Frenchies popular, coloring that is close to that of the Blue French Bulldogs, but lighter. They can have blue or brown eyes.

Lilac Frenchies have the same bat ears and scrunched up faces that the breed is known for. They only grow to an average of 25-28 pounds, making them great companion dogs for people who like to take their pets on errands and trips. They require a fairly high level of interaction and care, as they’re known to crave attention and to be sensitive to extreme temperatures. They’re prone to bursts of energy and long naps, and they come with the signature Frenchie snoring, grunting and snorting.

Most breeders sell Lilac French Bulldog puppies starting at about $20,000 because the color is rare. Compare that to a standard gray and tan French Bulldog, which you can buy from a breeder for an average of $2,500, sometimes as low as $1,500.

Lilac Frenchies have only been around for about 10 years. They’re the product of selective breeding and are the result of mixing the DNA from Chocolate and Blue French Bulldogs. This variety of French Bulldog exists because of the work of expert breeders. They’re born with a blue coat that gets a silver lilac hue as the puppy gets older. In most cases, only the breeder will be able to predict which of their blue puppies are Lilac Frenchies.

All French Bulldogs originated in England in the 1800’s and are a cross between English Bulldogs and Ratter Dogs. They migrated to France with traders and merchants and became popular with Parisian nobility. From there, they spread throughout the world.

Most commonly, French Bulldogs have coats that are fawn or brown and tan; Lilac French Bulldogs are rare, but they are recognized as a pure breed Frenchie by the American Kennel Club. As such, you could register your Lilac Frenchie with the AKC and compete, if you want.

To get a Lilac Frenchie coloring, you have to have a combination of genetics on the D-locus (the Blue gene) and the B-locus (the Chocolate gene). Both genes are recessive. That means the puppy must inherit two copies of the Chocolate and Blue gene to be Lilac - the genotype for Lilac is bb/dd.

Breeders use genetic testing to determine their dogs’ genes and then breed from there.

Lilac French Bulldogs are much like the other varieties of Frenchie. They’re brachycephalic, which refers to their flat-faced features. Their smushed faces make it difficult to breathe and for them to cool off. They’re prone to overheating, overexertion and asthma due to their head shape, but they do love a good walk. Just keep an eye on their breathing while the two of you are out and about, and maybe throw a sweater on your Lilac Frenchie if it’s chilly outside.

Because of their genetics, Lilac Frenchies can have more sensitive skin than other types of French Bulldogs and can have other skin disorders, like color dilution alopecia.

Lilac Frenchies can also suffer from other inherited diseases and allergies and are prone to breathing problems, joint diseases, spinal disorders and heart issues. Their natural lifespan is 10-12 years, so just be sure to bring your dog in for regular vet check-ups to keep them healthy and happy!

Perhaps one of the most famous Lilac French Bulldogs is Lady Gaga’s Lilac Frenchie is named Asia. The pup was one of three of the pop star’s dogs that were kidnapped in 2021 from a dogwalker. According to news sources, the dogwalker was shot in the chest during the dognapping. Lady Gaga offered a $500,000 reward for their return and a good Samaritan found them a few days later, tied to a pole, miles from where they’d been abducted. Five were arrested in association with the crime.