What is a Fluffy Frenchie? 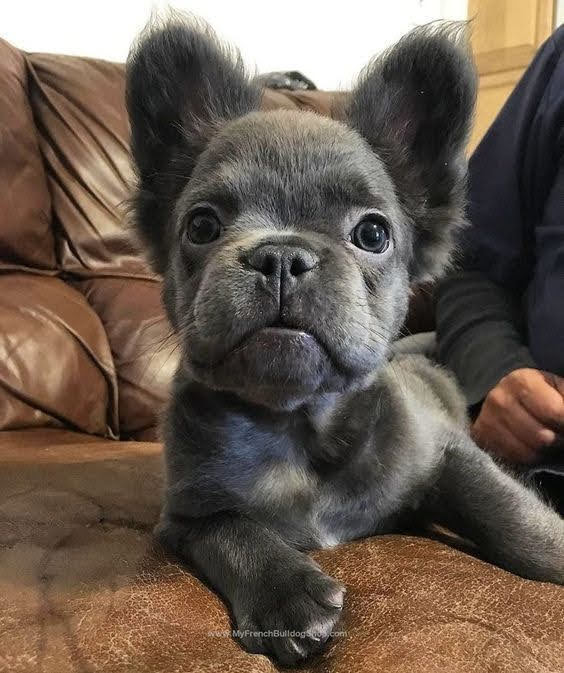 Fluffy Frenchies are known for their scrunched-up faces and long fur, and they’re probably the closest you’re going to get if you’re in the market for an Ewok from the Star Wars series.

These kinds of French Bulldogs come in a range of colors – fawn, brown, white, black, blue and lilac. The only real thing that separates them from the rest of the French Bulldog breed is their coat, which is longer and fluffier than the others in the breed.

Furry Frenchies are sweet little balls of energy, and their wavy hair is longer around the ears. They come with all the regular French Bulldog traits like snoring and snorting, drooling and grunting.

Like other Frenchies, they’re great family dogs, easy to train and have a medium level of energy. They grow to an average of 16-30 pounds and live 10-15 years. They’re a bit more resilient in cold weather but are still sensitive to extreme outdoor temperatures.

Furry Frenchies are the most expensive French Bulldog types with a cost that can range from $15,00 to $35,000. Some breeders who boast of purebred blood lines and a combo of rare colors like blue or lilac charge upwards of $65,000 for a Fluffy French Bulldog puppy.

Furry Frenchies are a rare type of French Bulldog, a breed that comes from England and became popular in France. That popularity spread through the world as the little, muscle-bound companion dogs traveled with French nobility.

Over the years genetic defects or variations have led to rare types of French Bulldogs – the Blue French Bulldog for instance, and a long-haired version called the Furry Frenchie. These dogs have long hair on their coat because of a rare autosomal recessive gene called Fibroblast Growth Factor 5. The recessive gene is usually hidden in the purebred puppy’s parents but presents in the puppy. The gene is present in the French Bulldog bloodlines because they were originally bred from English Bulldogs and Ratter dogs, which have longer hair.

This gene creates the lion-like mane, long hair around the bat ears and a fluffy body of wavy fur, which makes the Furry Frenchies wildly popular. They’re rare, though because both parents must have the long hair gene to create a litter of Furry Frenchies.

Fluffy Frenchies are small and personable and they’re tough little teddy bears come to life with their fluffy coats, permanent scowl and folds of skin. They stand out among the other Frenchies because of their long hair, but they’re otherwise very much like the rest of the French Bulldog clan. They do also shed a bit more than the other French Bulldogs, but all that hair has to go somewhere!

Fluffy Frenchies are known to be personable and medium maintenance dogs with a medium amount of energy. They’re still the muscle-bound bundles of joy that make great adventure partners, just a bit fuzzier. Their size makes them perfect for a companion dog during travel, running errands and for fitting in an over-the-shoulder bag. They’re also small enough to be ideal apartment or studio dogs, if you’re comfortable living with their larger-than-life noises. As breeders have recognized the popularity of Fluffy Frenchies, more and more puppies are becoming available on the market and are becoming coveted by celebrities and anyone who has an extra few grand lying around.

Because of the selective breeding that creates Fluffy Frenchies, these dogs can have the increased potential for health issues that are common for French Bulldogs. They’re prone to overheating, overexertion and asthma because of the shape of their heads. French Bulldogs are brachycephalic, which is a term that refers to the flat-faced features common to the breed. Their flat faces make it difficult to breathe and for them to cool off. They like walks and being outside, just make sure to monitor their breathing while you’re out together.

Fluffy Frenchies can also be prone to allergies and alopecia, breathing problems, joint diseases, spinal disorders and heart issues. Chat with your vet about ways to keep an eye out for developing problems and take your dog in for regular check-ups to keep your Fluffy Frenchie healthy.

Fluffy Frenchies Are The Ultimate Trend

French Bulldogs have been a longtime go-to companion animal for the rich and famous, but recently the rarer types of Frenchies are becoming more popular – dogs like the Blue French Bulldog and the Furry Frenchies. The dogs are great miniature companions. They’re personable and tough-looking, small and sweet and the Furry Frenchie is becoming a trendy pet for anyone who can afford the cost.