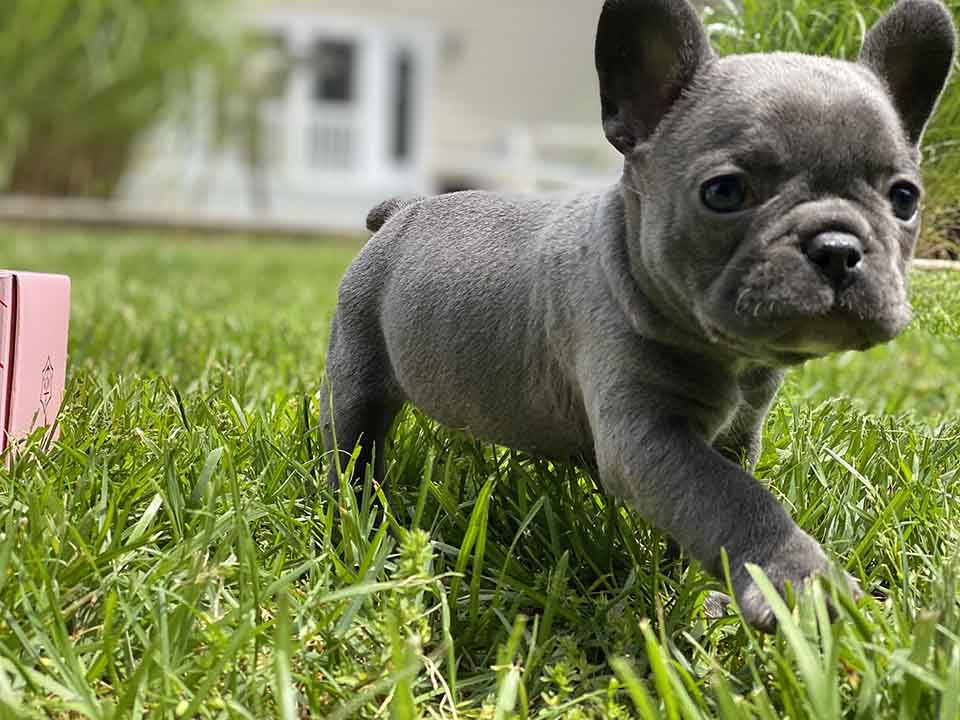 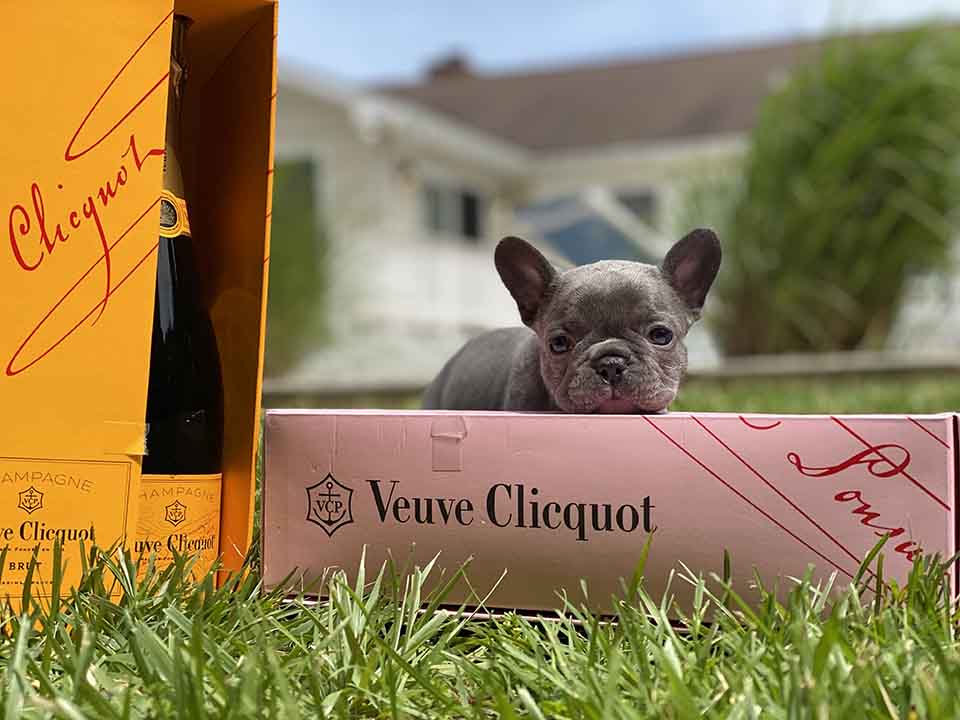 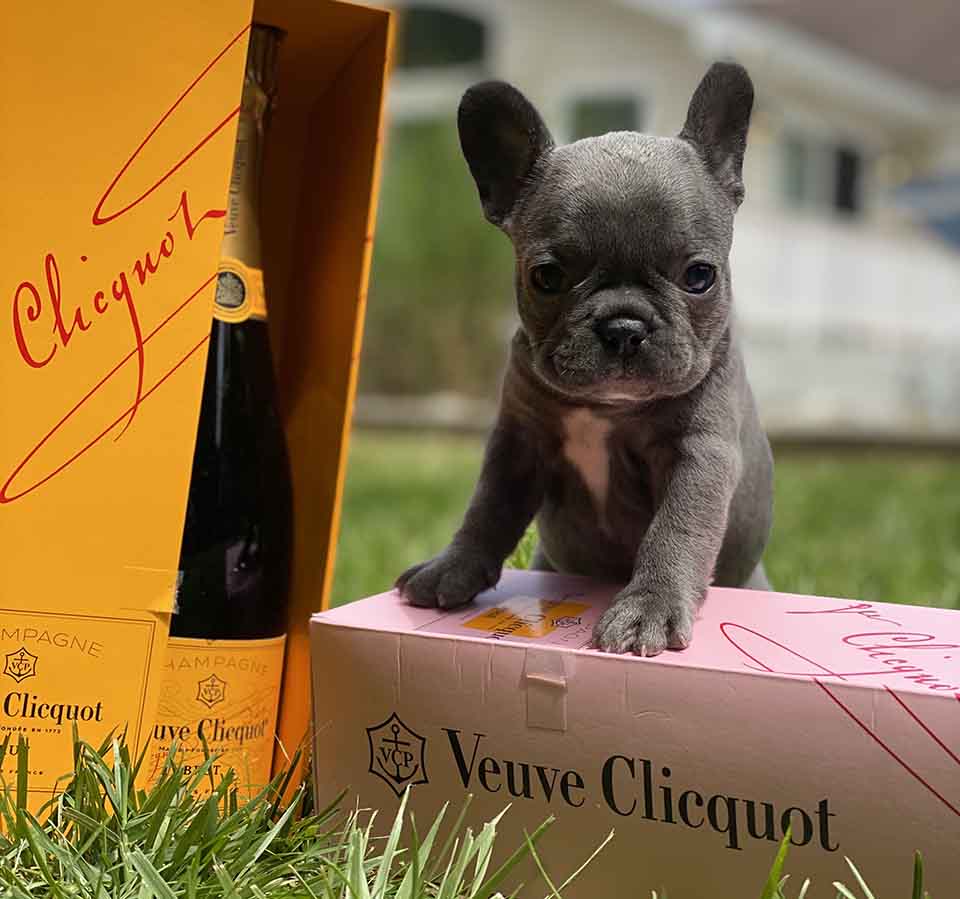 With blue eyes and a greyish-blue hue to their fur, the Blue Frenchie is a rare and popular type of French bulldog.

Like any other Frenchie, these dogs are lazy and lovable, are great family companions and grow to be an average of 25-28 pounds. They’re also sensitive to extreme outdoor temperatures and tend to be the most expensive of the French bulldogs, with a price tag that can range upwards of $3,500 for a blue Frenchie puppy.

These cute and cuddly little gremlin pups aren’t easy to ignore, and not just because they tend to demand ample amounts of attention from their people. They snore, snort and grunt their way through life, just like any other flat-faced dog breed.

Blue Frenchies get their color from a recessive gene, so the only way to get a blue French bulldog is to breed to another blue French bulldog. The blueish-gray color began to show up in litters in the early 1900’s and became popular almost immediately because of their coat color and because they tend to have blue eyes.

While Blue French Bulldogs are wildly popular with people around the world, they aren’t actually a recognized breed by the American Kennel Club. That’s because their rare coat color is due to a genetic condition called color dilution alopecia. The condition doesn’t affect the personalities of Blue Frenchies, though, it just gives them their beautiful coloring.

They’re known for being compact, medium-maintenance and for being clean dogs. They are the most expensive type of French Bulldog breed, but otherwise are similar to other Frenchies.

Like the rest of the French Bulldog crew, they are roly-poly, low-energy dogs that don’t shed a lot and that love companionship. They’re a dog with a giant personality in a small package and they love nap time as much as they love play time. And they’ll be making noise while they’re doing both.

They’re little muscle-bound dogs that can be both masculine and adorable. Unlike other small dog breeds, French Bulldogs aren’t frail-looking. They don’t have a reputation of being hyperactive. They’re known for being strong and resilient. They’re small enough to fit in your carry-on luggage or an over-the-shoulder bag while you’re out on errands. Their size also makes Blue Frenchies a great apartment or studio dog; they’re small enough to fit almost anywhere!

Like all French bulldogs, these small animals need to live indoors and usually need a jacket or sweater if you’re walking outside when it’s cold. They’re prone to overheating, overexertion and asthma because of the shape of their heads. French Bulldogs are brachycephalic, which is a term that refers to the flat-faced features common to the breed. Their flat faces make it difficult to breathe and for them to cool off. They like walks and being outside, just make sure to monitor their breathing while you’re out!

Blue French Bulldogs’ coats can be more sensitive, and they can be prone to oily skin. They do love to stay clean, though, so you don’t have to worry about cleaning them more than usual.

Blue Frenchies can also suffer from inherited diseases and allergies like alopecia, and are prone to breathing problems, joint diseases, spinal disorders and heart issues. Chat with your vet about ways to keep an eye out for developing problems and take your dog in for regular check-ups to keep your Blue Frenchie healthy and to enjoy their company for their natural lifespan of 10-12 years.

Blue Frenchie as a Status Symbol